Any Magento 2 page requested from a browser is processed by a web server. Magento 2 loads 170 scripts per page on average. All incoming requests add an additional load for a server CPU and Memory. As a result, it increases infrastructure costs to maintain an acceptable level of page load time.

I’ve installed Magento 2.2.0 release with a sample data in order to get a number of requests processed. The following table shows the number of static and media files and the size requested on the different Magento 2 pages.


There are different content delivery network services available on the market. Such services speed up content distribution across the world faster edge locations available to distribute the content to different pricing options. This tutorial is based on the AWS CloudFront service.

As I am a big fan of AWS services, my attention for the last couple of years has been attracting by the AWS CloudFront. In order to use AWS CloudFront you should have an AWS Account. In case you don’t have the AWS Account, read the How do I create and activate a new Amazon Web Services account?

Once you are logged into the AWS Console, open Services tab and type “CloudFront”. Select CloudFront Global Content Delivery Network suggestion from the popup.

On the Create Distribution page we have to set the distribution for static files. There are a set of required settings needed to be provided in order to create the static content distribution. Some settings should not be changed. Below is a list of recommended settings to be used for this tutorial.

Please also note the Price Class setting is set to Use Only US, Canada, Europe. It gives the great distribution coverage and a lower pricing for AWS CloudFront usage.

For the Whitelist Headers setting select the Accept, Host, and Origin values as it is shown below.

Once all settings are provided for the static distribution, click a Create Distribution button.

The OPTIONS HTTP method is used for the Fonts, HTML templates files requested from the JavaScript files.

It takes about 15 minutes for the AWS CloudFront to create the new Distribution.

After the distribution has been successfully created the Magento 2 static files should be accessible via the new CloudFront distribution.

Same steps should be performed to create the distribution for Magento 2 media files. From the AWS CloudFront Distributions page click the “Create Distribution” button, then “Get Started” under a Web delivery method.

Media files should be accessible via the new CloudFront Distribution.

For the content delivery network service Magento 2 should send proper response headersto allow requests for static and media files from different domains. Before the new AWS CloudFront Distributions can be used together with Magento 2, additional Apache instructions should be provided.

Without additional response headers it leads to the Access-Control-Allow-Origin error for all static and media files requested from the AWS CloudFront or other content delivery network.

Note that the file extensions list in the FilesMatch section has been modified and 2 additional extensions are added: html and json. As for the html extension, the Catalog Store settings should be revisited due to a .html URL suffix usage for Products and Categories.

After both .htaccess files are updated with additional response headers Magento 2 is ready to serve static and media files from an alternative distributions.

In case you have multiple stores, change the Store View so the configuration changes will affect the specific store.

Click a Save Config button to make changes in the configuration. Navigate to the System -> Cache Management page and refresh the Configuration and Page Cache cache types.

Navigate to Magento 2 frontend and observe domain names changes of the static and media files.

Magento 2 website has been configured to use CDN for media and static files.

If you would like to have friendly URLs for the CloudFront distributions the CNAME records should be configured for AWS CloudFront. CNAME records creation should not take much time to configure as part of your Domain provider.

As for domain names I prefer to have the following names: 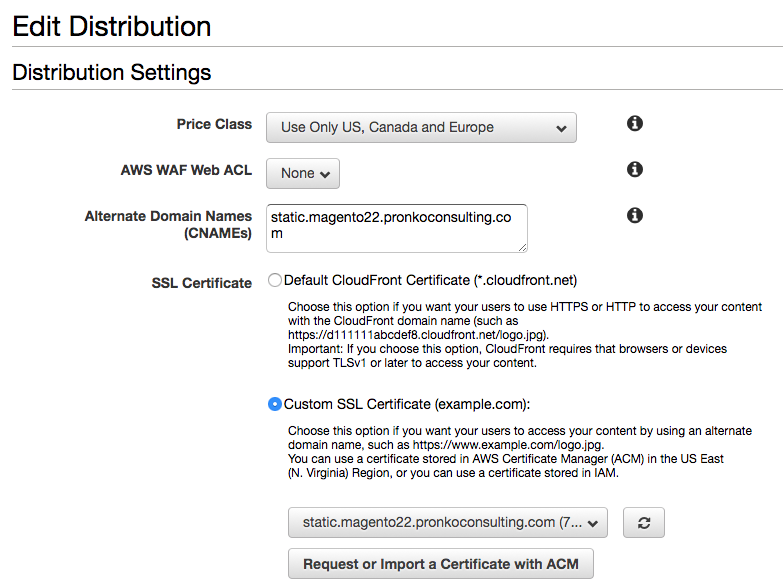 You may need to create new the SSL Certificate for the custom domain. The AWS Certificate Manager allows to create SSL Certificate in a couple of minutes. Click a Yes, Edit button to save changes. It may take up to 15 minutes for changes to be propagated for the distribution.

Once you performed necessary changes the domain names should be changed on the Magento 2 frontend.

The performance metrics are based on the built-in Full Page Cache. Page Load Time metrics has been taken from Pingdom. The page load time includes rendering of all scripts loaded on a page. The minification of the static content is disabled for the test.


Number of incoming HTTP GET requests to the web server with the CDN configured has been decreased. It allows to decrease CPU and Memory usage on the server and serve more incoming requests from users.

Content Delivery Network for an ecommerce store is a must have nowadays. Especially, when the business grows and number of customers increases year-to-year. The AWS CloudFront is a great service for the reasonable pricing and edge locations coverage.

This post was written for Atwix blog by Max Pronko, CEO & Founder of Pronko Consulting, Chief Technical Officer at TheIrishStore and GiftsDirect.

Max with his team of Magento enthusiasts won the Best Magento 1 to Magento 2 Migration Award at the Magento Imagine 2017. As one of the most active developers on a market and in the Magento Community, he launched Magento 2 blog, and Magento DevChannel, where he shares his knowledge, experience and the best practices in the Magento field.